2002 CREATION
What happens if we combine musicians and electronic instruments such as the Theremin, Ondes Martenot, hot-gloves? If we consider that the note is not the essential element in the playing and in the piece, but that the score could result from the object's shape?
Playtime.
Playtime, the time to play 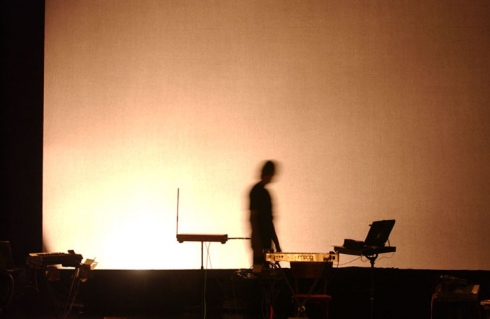 “The composer must work with the one common denominator of sound and silence: time” John Cage

In 1920, a young and attractive Russian physicist invented the instrument which would carry his name, the Theremin. This instrument was certainly the first to reveal the incredible sound of triode tubes and a heterodyne circuit; but it is also an instrument which is neither plucked, nor struck, nor blown, nor even touched by the musician. This double singularity, this "etheral voice" associated with the almost magic theatricality of its gestural control, would fascinate crowds but would also pay the price, a sort of curse which all future electronic instruments would inherit: this instrument, free of any pitch limits or mechanical constraints, would be condemned to play, for better or for worse, violin, cello, flute or soprano parts, or eventually produce special effects.

It would never occur to anybody (anybody?) to ask a shamisen, ngoni or ranasringa player to play La Marseillaise or Au Clair de la Lune, just man to see if it is truly a musical instrument. This is nevertheless the major risk which you take daily if you are a Theremin, Méta-instrument, Biomuse, hot-gloves, or VCS3 player... In this so-called techno era, when contemporary music is being born, one is asked to play a little tune.

What happens if we combine any of these instruments? And if we consider that the note is not the essential element in the playing and in the piece, but that the score could result from the object's shape whose contours are followed by the hand, that the rhythmcould introduced by a sort of mosquito hunt gesture, that the melodic outline is produced by the person’s trajectory? What happens when the relationship between two musicians portrays such a dramatic situation that what takes place is more important than what they play? What happens when the image of the musician disrupts the perception of what he’s playing to the point that it completely transforms the listening? We created Playtime by asking all of these questions.
Playtime, the time to play...

Playtime is sort of ceremony to free these instruments from their original curse, but it is also a playful ceremony; because musical instruments, whatever they are, are meant to be “played”.

As a way of playing the game to the end, during the concert (because this is indeed a kind of concert), you will also be able recognize (or not) musical scores originally written for acoustic instruments, such as  fragments of Ars subtilior, Richard Strauss, or Karlheinz Stockhausen …

Even though we won't "play you a tune", Playtime will be a "tuning play", with invited artists: musicians, but also choreographers, dancers or actors, acrobats or jugglers, playwrights or writers, painters or visual artists, engineers or singers...

Musicians from the first stage :