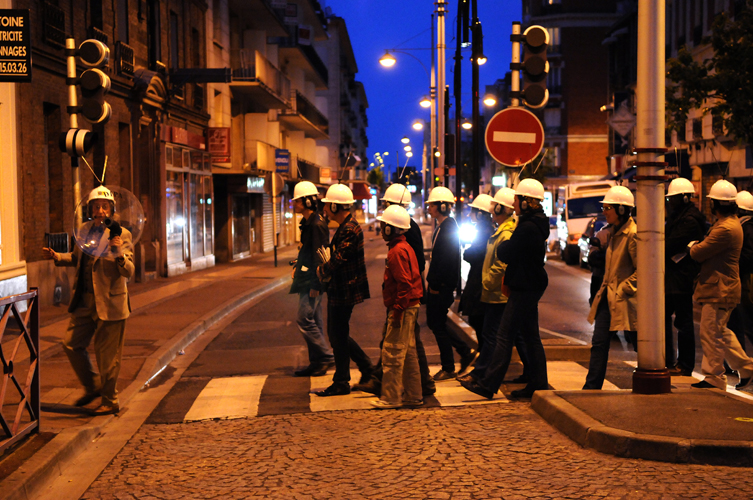 The visits are confidential, walls have ears, any inconvenient sound production might spoil the experience; thus the public becomes just as aware of its own sounds. This is also the theatre of “scientific marvel,” where spectacular science gives a glimpse of parallel worlds, and where the public itself is the “experimentation” subject.

In the same way early XVIIth Century scientists needed a selected audience to testify the reality of the phenomenons that they used to demonstrate during their experimentations, our searchers regard the public as invaluable witnesses and listeners.

Each visit has a capacity of around 80 people, split into small groups of 15 to 20 people. The meeting spot, from where the visit will depart, is at the scientific base. Badges are distributed, the director gives a welcome speech, and the different guides who will be leading the visit of the excavations are introduced. These characters have all the characteristics of scientists who live in an insular community on an archaeological site or scientific base (Antarctic, sub-marine, even spatial, lets not be sparing with our imagination). All are invigorated by the same passion that they have for the site, they each have his/her own personal approach depending on their speciality : history, geology, anthropology, physics...

The public is finally separated into groups, which will come back together only at the end of the visit for a collective finale.  Each researcher leads a group of around 20 people for about a 12 minute visit of his/her site. The groups are lead from one site to the next, and pass from one guide-character to another.

The entire visit lasts about 1 ½ hrs, and takes place, preferably, at nightfall; the auditive intensity and the mystery increase in the darkness. After the visit of the four sites, the groups are untied for a collective finale and a farewell to the public. It's possible to have continuous visits as well.