From July 29th until August 6th, during 9 days and 9 nights, the composer Michel Risse and the Décor Sonore company transform 43 lampposts of Jakominiplatz into an invisible garden of 43 sound flowers in perpetual hatching. Almost imperceptible drift, meetings without appointment, with dancing passers-by, connections between the soundscape, the bodies and the signalling system. 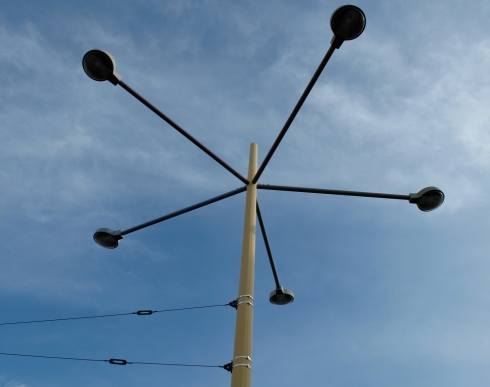 Michel Risse turns himslef into a gardener of sounds and begins to search for the Sharawadji effect on the Jakominiplatz, considered as a "heart beating of the city". In order to organize this "graceful disorder", he invites two French companies : The Jeanne Simone company for contemporary dance and Ici-Même (Paris) for urban scenography.

Jakominiplatz, a place to go somewhere else 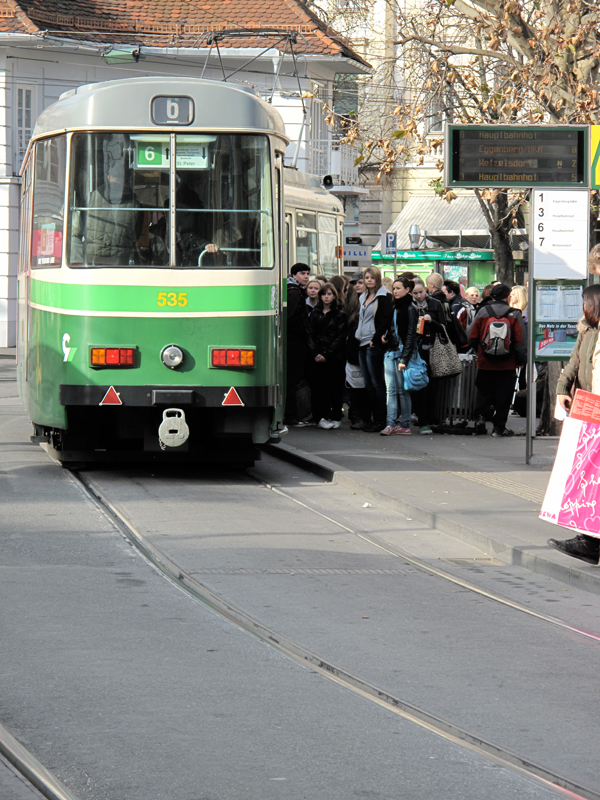 Each time Werner Schrempf brought me to the Jakominiplatz, it was to attend an invisible show. Invisible, but permanent for who takes time to slow down, to contemplate, to listen, to enter this forest of lampposts as in another dimension, and to get won by "the sharawadji effect". As a forest of lampposts, the Jakominiplatz is not a place for touring or watching shows; it is a transitional place, a place to go somewhere else. Michel Risse

At first sight, everything is against the possibility of "show". In this calm but ceaseless vehicles and pedestrians traffic, no clear vision, no physical space suitable for a proper relationship between "scenic“ and “public", nor for a theatrical performance temporal space. Indeed, if we go to this place, it is above all to go somewhere else. Thus, these are ideal conditions to break with the codes of art consumption, creating "windows of unexpected", zones of ambiguity, passing through looking-glasses, in which nobody is certain that nothing nor anybody is "as usual", and that after all the common is undoubtedly very strange … 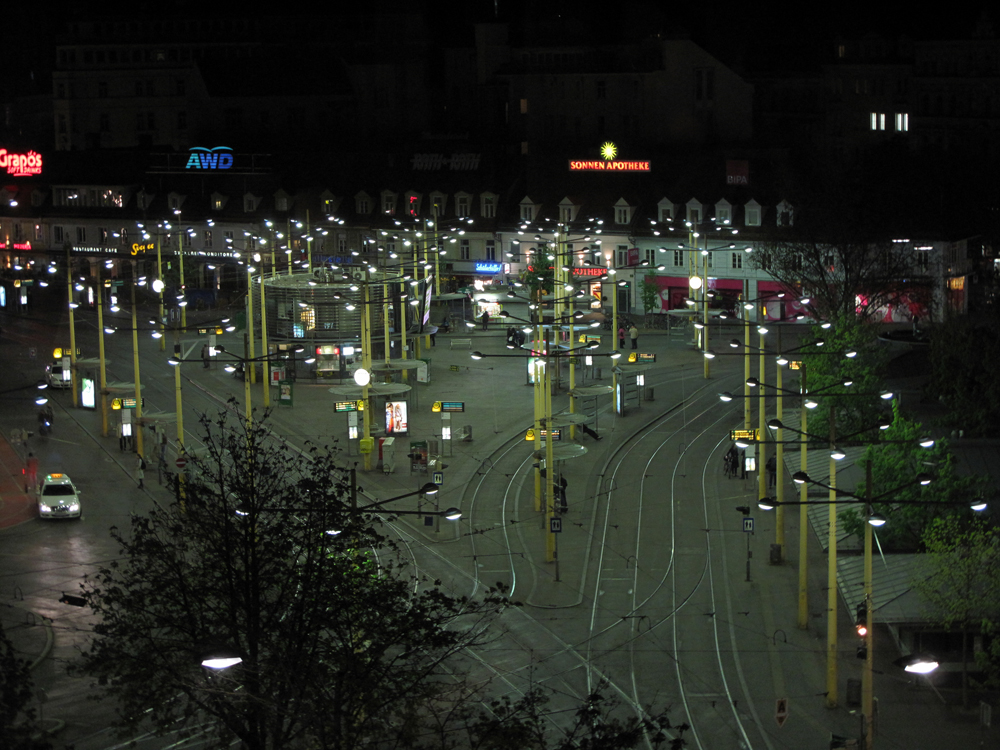 What will be the composer of the future? I see him rather as a kind of a "sound gardener", in charge of his contemporaries’ acoustic landscape. Or still as an architect, more worried to build alive and livable constructions than to sign formal and definitive abstract works.

The urban soundscape looks more like a fallow, a piece of waste ground, than a garden. Especially not a public garden, with its flowers, paths and fountains. Nor even a kitchen garden, with its rows of vegetables. Even less a "Jardin à la française", triumph of the "culture" over the "nature", the order over the fate. It is in contrast with this perfectly geometrical organization of the landscape that in the XVIIIth century, European travelers were struck by the inexplicable beauty of the eastern gardens, whose harmony obey no visible rule. They heard the term “sharawadji" to mean a happy asymmetry, a pleasant irregularity. This "graceful disorder", which "can move only by surprise", was later adopted by the French aristocracy under the name of "jardins anglo-chinois" (sic). Under their tarnished forms, they are at the origin of city parks, zoological and botanical gardens, and even amusement parks.

Recently reintroduced in philosophy (1976, Louis Marin) and in sound aesthetics (1995, J-F Augoyard and H. Torgue), “The beautiful Sharawadji affirms itself in contrast with the banality from which it originates. Sharawadji sounds, as such, belong to everyday life or to known musical registers. They only become Sharawadji by decontextualisation, by a rupture of the senses. The sonic matter that encourages the Sharawadji effect is up to the appreciation of each individual, in a given context, however the soundscape, and in particular urban soundscapes can, as a result of their unpredictability and diversity, favour it. The sonic wealth of nature is also susceptible of creating the Sharawadji effect” (translation from C. Schryer).

To be surprised, do not wait for anything 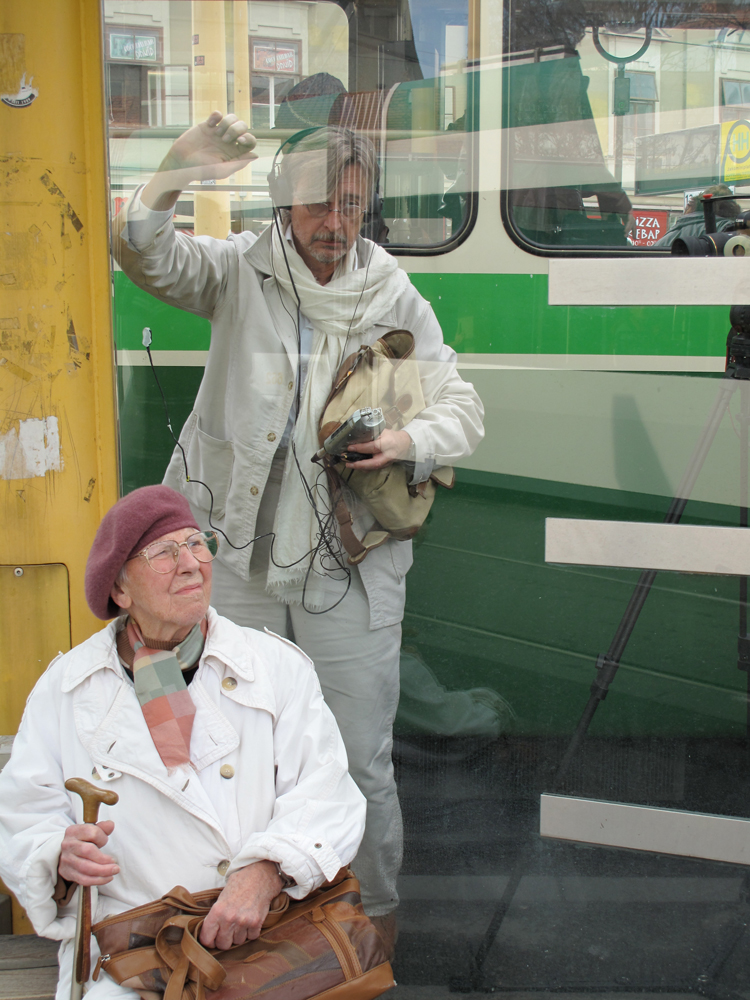 The project is not to create a show, to gather crowds and to fish for applauses. The show’s orthonormal marks, with its prologue, its narrative, its conventions and its compulsory final, all this is against the sharawadji effect. So much the better, because on the Jakominiplaz, everything goes against the installation of a show: spaces are transitional, crossed by traffic lanes, bristled by obstacles to the sight and the theatrical performance. Here, no representation, only presentations. We pass, we wait for a streetcar or an appointment, we go away; contrary to the theater or to the gallery, where we are convened for one definite time, and where we "expect to be surprised".

But how do we provoke the sharawadji effect? How to tame the fate, the state of grace? To organize the chaos, without a tidy visible order? (The harmonious anarchy, finally!). In the XVIIIth century, the landscape architects of "jardins Chinois" created an idealized nature, organized it in "scenes" by diverting streams, arranging rocks, building "folies", exotic or symbolic buildings (false graves, false mosques, false pagodas, mythological temples, false ruins), with the same techniques as for the composition of paintings (Poussin, Le Lorrain, etc.). Now, the Jakominiplatz is not a garden, neither a gallery, nor a theater; it is a forest of masts, lampposts and signals, an open-air station. The first rule is to not disrupt the traffic, which has to work normally.

Thus it is the right pinch of abnormality that can provoke the sharawadji effect. The unexpected matching between a sign and an other one, a small sliding of the senses and the sense which makes doubt. Doubt that the passer-by who waits for his streetcar is maybe a character put here deliberately for you, that the bell of the streetcar is more cheerful than usual (unless these are surrounding sounds which make it so musical?), doubt that the road sign is possible to decipher, or then as a work of art.

A unique and contextual creation 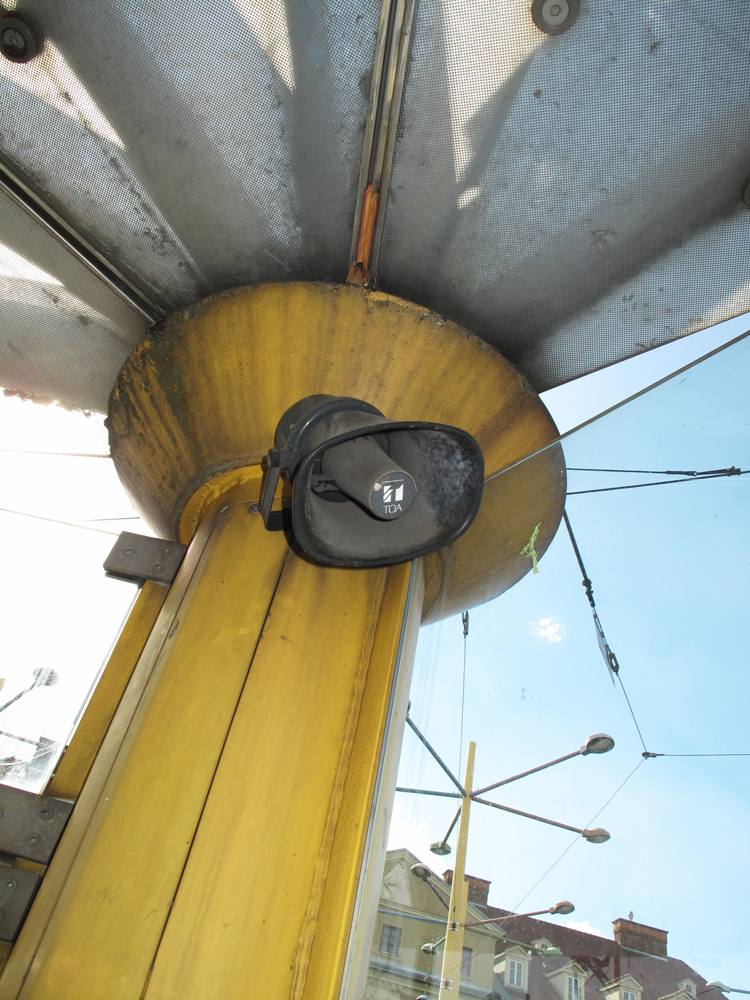 This Sharawadji effect is essentially based on a 43 loundspeakers sound installation, revealling the soundscape by multiphonic spaces and movements of sound objects. Within this framework, all the unexpected events appear suddenly :

A mobile amplification system : Jérôme Bossard, Damien Boutonnet (drums), Kistof Hiriart (vocalist), Stéphane Marin (mixing musician) examine the street furniture thanks to their mobile amplification system. Simple travelers in transit, they are interested in the furniture’s sound, highlighting the musical harmonies by the instrumental gesture and the voice in immediate concerts.

Z, graphical implantation of the Sharawadji Effect, by Ici-même (Paris) : Mark Etc, Nataska Roublov, Nicolas Lavergne.
Besieged by visual informations under the lamppost canopy, the Jakominiplatz disorientates and stuns. However, for the walker who pays attention, he will notice that something is changing... The Sharawadji gardeners  take care of the environment and organizes a watching game with a pattern. Imposing sign, sign far away, stripes... Will you find it ? The Sharawadji effet questions the everyday sign logics and reminds the passers-by that the size doesn't assign the value. For example, the last letter of the alphabet can be essential. It is a kind of an upholder of the law's game.

A drifted space score and its sounds, by the Jeanne Simone company : Laure Terrier, Nathalie Chazeau, Mathias Forge.
Faithful to its contextual approach of dance, the Jeanne Simone company offers choreographic instants where the daily body drifts itself to the dancing body. The trio works with the bodies, spaces, movements, but also with the sounds and the objects. Thanks to unexpected ballets, they reveal the place and its users, the physical act of listening our environement, and enlights the ubiquitous pictograms from the place.

Incognito appearances by inhabitants, staff from the city and the transport company, artists from La Strada festival, choreographed and "mixed" by Décor Sonore.

Dates : From July 29th until August 6th, day and night.