For the lauching of his artistic residence 2011-2013 at UPMC (Pierre and Marie Curie University, Paris), and for the European Heritage Days on September 16th and 17th, Michel Risse and Decor Sonore turns the University into a theater of a very unique experience, during the time of a spectacular architecture concert which could and shall never be heard anywhere else. 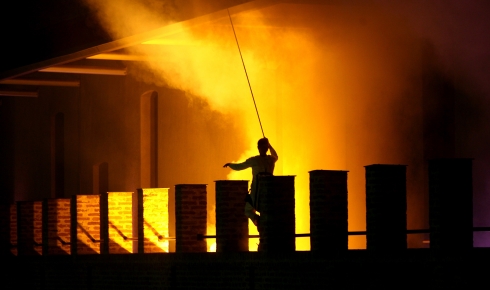 The Paris « Quartier latin » (latin district) was born exactly where the UPMC (Pierre and Marie Curie University) is located today : the St Victor Abbey was at the XIIth Century one of the most prominent intellectual centers of the medieval western world. It gave birth to the Universities of Paris, where everyone taught, studied and spoke in latin. At this time, the word « campus » had not its modern English-American meaning as " premises of education, restaurants and residence built on vast green spaces ": it indicated a "wide free space", a "field (of actions)" or even a "theater" …

This new creation Instrument|Monument decyphers the University architecture as a score, listens to its structures and its furniture as musical instruments, to make the public space resonate, to sound out the campus : Campus sonoris.

This creation takes place within the framework of the 2011-2013 residence of the company Decor Sonore in UPMC - Pierre and Marie Curie University, in support of DRAC Ile-de-France.
With the support of the circus and street cooperative 2r2c