2000 CREATION
The Urban Chamber Orchestra
The 20 musicians, a musical troupe more than orchestra in the strictest sense of the term, set their instruments against the sounds of the city, turn urban spaces into waves, and mix acoustic sounds, sampling, symphonic structures and playing in public spaces. 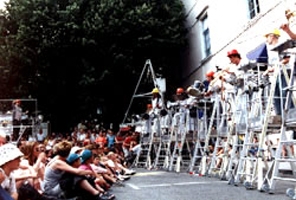 20 nacelles – individual stages - which continuously transform the scenographic space. 4 pyramids 6m high sound-carriers at cardinal points. Piccolo, trumpet, trombones, saxophones, cello, viola, guitar, bass, kettledrums, glockenspiel, polyblocks, samplers, steinerophone. And drills, jackhammers, car horns, alarms, sirens, chisel, grinders, road signs, internal combustion engines...
Two sound searchers with microphones at the end of booms pick up the tones of the orchestra, urban objects, or the public, and to make just as many pretexts for musical games.
A constant dialogue goes on between acoustic and reprocessed, sampled sounds, and a quadriphonic sound system surrounds the public.
This is a concert of sirens and alarms, playing with the municipal street sweeping and public works machine and with the participation of the municipal orchestra or music school pupils. The road sign percussion triggers notes, noises and harmonies.

“When we listen in a different way, we hear something else.”
With its constant noise or its noise pollution, the city is an extraordinary source of inspiration and a tremendous place for the public to listen and to meet one another; and where the musical text and the performance context fuel and shed light on each other.

The 20 musicians of the Urban Chamber Orchestra, a musical troupe more than orchestra in the strictest sense of the term, set their instruments against the sounds of the city, turn urban spaces into waves, and mix acoustic sounds, sampling, symphonic structures and playing in public spaces. They are united by the musicality and by the common desire to invent a music of today in direct contact with the listeners, with their instruments or with any object bringing about a musical project.

Here, amplification is not the source of a vast “mis-hearing”.  L'Orchestre de Chambre de Ville (The Urban Chamber Orchestra) retains the unequalled pleasure of the acoustic sound of instruments ringing out in urban space. On the other hand, the sampling of city sounds and their transposed or transfigured rhythmic playing establishes a bridge between urban sounds and traditional instruments.

With the support of the French Ministry of Culture, the SACEM, the ADAMI, the SPEDIDAM.

With the help of Moulin Fondu-Compagnie Oposito, Lieux Publics, and AMI.