A creation by Pierre Sauvageot 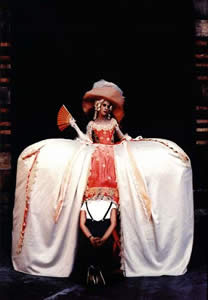 Will Flea, aka Dora Lou, aka Madame Lucie, aka Annick Hémon, find a new nickname, since this character bringing together a small size, the love of the operatic voice and street show fascination seems to have been custom made for her?

“Go look under girls' skirts,” Alain Souchon sings. Joséphine wears a wig, an enormous hat; she is powdered with talc, and wears a long crinoline dress, with a plunging neckline.  She has a proud stature, and not a word leaves her mouth. The spectators kneel down prostrating themselves before our Josephine, who, Beauharnais on the outside, reveals more of a Baker on the inside. In the middle of a kaleidoscopic jungle,  the legs and feet of our character launch into a dreadful saraband dance. The choreographic exploit is striking, between the static posture above and the volcanic movement below.
Only a West Indian fuelled by entrechats and by the Charleston, a regular of outdoor choreographic creations or of the "Gueules de Piaf"  (The Faces of Piaf), a lover of violent physical contrasts, only Jany Jérémie could be this Josephine.