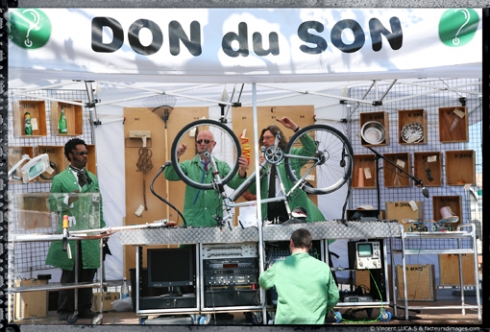 The idea of donating blood to save human live is one of the rare, authentically generous actions of our societies. Here, the notions of race, sex, religion, and commerce are erased. There is the notion of simultaneously being a single individual and all of humanity, a non-exclusive “us”, united in the same Humanity by the anonymous and free exchange of our vital fluid. Whereas Don du Son may not have the same medical virtues, in perspective, it symbolically calls on similar motivations. To give his or her sound doesn’t hurt, but it is a personal, voluntary act, both symbolic and concrete, that connects all donors between them. Here, the sound of each donor is an offering to be listened to, an intimate object which will contribute to building a work of art made of mixed, exchanged, transfused, sublimated sounds, shared by all.

Don du Son is an outcome of experiments led for several years with the company Décor Sonore. The idea is to directly engage the spectator, to bring him into the artistic process, not through amateur participation, but through the sound object with which he entrusts us. This personal object - whatever its market or sentimental value - is going to represent him on stage, and will radically change his relationship to listening, making him pass from a consumer’s simple curiosity to a deeper involvement, conducive to  discovery, delight, emotion, and poetry.

Don du Son is an observatory, an observatory of ourselves, an ethnographical glance at our everyday sound life, like that which Claude Lévi-Strauss had of the Bororo tribes: neither judgmental or accusing, nor indulgent or accomplice in what we ended up calling "music" in recent times.

More than a concert or a show, Don du Son is a contextual artistic device, which puts the public and the city back in the heart of the musical creation debate and proposes another vision of the sound world. This device contains: characters, scenography, a system of electro-acoustic treatment and production, musical and dramaturgic writing, and a set of tools for communicating with the public.