co-production with the Oposito company 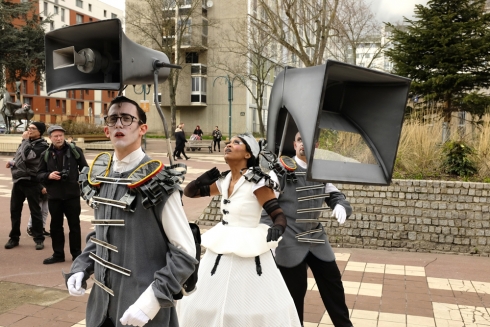 1994 : ten years of theatre, festivities and urban events for Oposito - ten years of spectacular and musical creation for Décor Sonore. Two paths which finally converged towards the only creation of its kind in the world: The Cinematophone, an electro-lyric opera-marching band – an astonishing street show working on a revolutionary multiphonic sound system, which toured the world between 1995 and 2007.

The Cinematophone has remained unmatched even since it was created – and in 2018, it is coming back !

They are eight musical automatons, dressed like soldiers, with heavy make up, smiling and wandering. Half flesh, half loudspeakers, they conjure up surprising sound images in the open space.

In their midst, a gracious and fragile diva seems lost and is looking around. Dressed in a long 1900s robe, a heavy pearl necklace and a medusa-like hat made of 35mm film, she wanders about, her mind lost in her own thoughts. Her mysterious gestures seem to indicate a direction which the automatons accept as theirs. Sometimes chaos erupts, the automatons assail the diva or scatter in all directions.

Are these hybrids the accidents of the monstrous coupling between a record player and this diva who, in the lead, seems to be making them replay sound pieces from her memory, her dreams, her fantasies? Or is she simply the conductor of a disordered, disturbed marching band, survivors from a vanished universe performing film episodes of her life?

Not a word is said; simply an extremely surprising and complex score blaring out from each automaton’s loudspeaker: marching band, opera, waltz, animals cries, even disrupted telephone conversations. A fascinating procession during which the identity of the diva remains hidden while the attitudes and postures of the soldiers will leave many in awe.

A bright and poetic event, a momentary and turbulent dream, a very curious story, a revelation which disapears without the obligatory salute in a rave of applaud.

Thanks to our exclusive wireless system, all the characters have complete mobility, play 8 synchronized discrete digital tracks with spectacular sound power and  precision, and can dance, parade, scatter, mingle with the public, surround them, and adapt and play with the natural acoustics and scenography of the site.

and more to come soon !

Show for 9 interpreters and 1 sound technician

Where the Cinematophone has been, and where to see it next...